You often see built-in seating (known as a banquette) in a kitchen or breakfast area.  Typically they work well in a corner or tucked into a window surrounded by built-ins.  They can add warmth and character to a room, eliminate clutter,  as well as add architectural detail.  They can also be helpful when space is limited or in a high-traffic area when more clearance is needed. 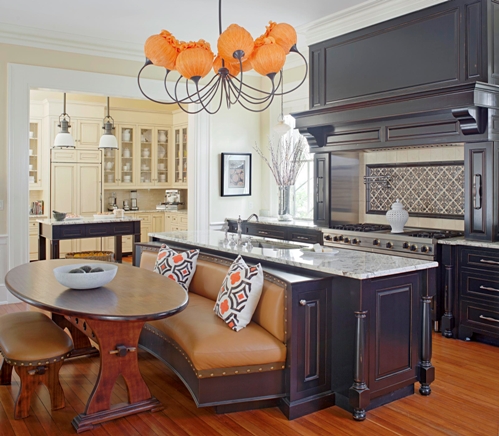 The curved banquette and organic feel of the chandelier helped to soften the angles of the kitchen. 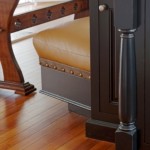 This Charleston kitchen was originally the house’s dining room.  Because of an existing  fireplace, not common in kitchens, the cabinetry had to be on the opposite wall.  Due to limited  wall space, a support kitchen was added as well.  The client wanted an eat-in area and liked the idea of the seating being in close proximity to the fireplace.  Because there was not enough depth between the island and the fireplace, we proposed attaching a banquette to the back of the island.  We designed an oval table to help navigate around the tight space and a small bench that remains under the table when not in use.  The pieces, as well as the cabinetry, were built by Meadors Construction.  Two tones of leather and nail head trim were used to add character and detail to the banquette and provide an old world feeling. 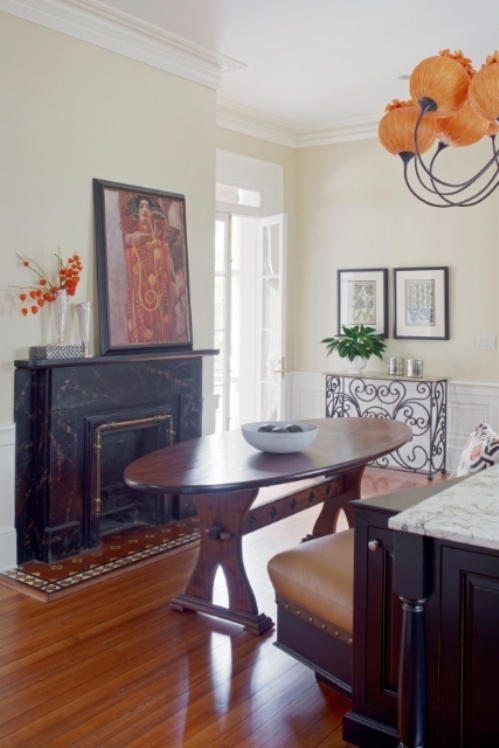 Facing the fireplace, the dining area creates an intimate space for eating in and entertaining close friends.

Special thanks to Meredith Corporation, publishers of Elegant Homes.

Latest from the Portfolio